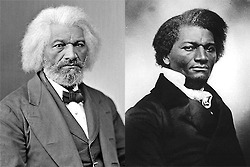 Known as: Famous Abolitionist, Orator, Social Reformer, Writer & Statesman (A leader of the abolitionist movement; His autobiography “Narrative of the Life of Frederick Douglass, an American Slave” became influencial in its support of abolition; Actively support edwomen’s suffrage; First person of African decent to be nominated for Vice President of the United States)