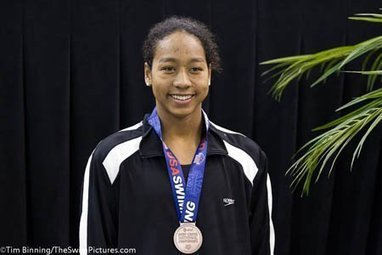 “Lia Neal came in fourth in the 100-meter freestyle finals. Her finish gave her a spot on the 400 freestyle relay team.

Neal, whose father is African-American, and mother is Chinese-American, became the second African-American woman to represent U.S. swimming in the Olympics. The first was Maritza Correia, who was a member of the silver-medal-winning 400-meter freestyle relay team at the 2004 Athens Games.

Neal, who lives in Brooklyn, started taking swimming lessons with friends when she was 6. She showed promise, and a swim mom recommended when she was 8 that she try out for a swim team.”