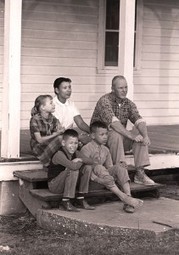 “Richard Loving, a white man, married Mildred Jeter, a black and American Indian woman, in Washington in 1958. Interracial marriage was legal in Washington, but it was illegal for Virginia residents to go there for the express purpose of interracial marriage. Six weeks after they got married and came home, then-Caroline Sheriff Garnett Brooks kicked down their door at 4 a.m. and threw the newlyweds in jail.   Their refusal to get divorced earned them a ticket out of the state. They lived in exile in Washington for a few years and longed for their country home in Central Point in southeastern Caroline. They eventually violated the law and moved back to Virginia.”
Via blogs.fredericksburg.com