Jennifer believes schools are an important resource for dismantling racism.

This encore performance is the first major fundraiser for the 2015 Kimbrough Scholars Program, which links students at Cambridge Rindge and Latin School (CRLS) with Northeastern University Law School’s Civil Rights and Restorative Justice Project (CRRJP). The CRRJP seeks to investigate racially motivated homicides from the 1920’s to the 1960’s, and to acknowledge respectfully the suffering of the murder victims’ surviving family and friends.

In 2014, the first group of Kimbrough Scholars participated in an intense collaboration between a CRLS-based Civil Rights history seminar and CRRJP. They traveled to Mississippi, where they interviewed local activists, 1960’s civil rights workers, and even relatives of the deceased victim. Their findings further contributed to the CCRJP’s ongoing investigation of the case.  Upon their return the students presented their findings and insights to an audience of faculty, students, and community leaders.

The Kimbrough Scholars Program is  continuing to grow at CRLS. This year, a second, larger group of Kimbrough Scholars will work with the CRRJP as they resurrect a cold case buried in the history of racial violence in a small, unincorporated community in Florida. While the Cambridge Public Schools and CRLS have committed to funding important components of the Scholars’ Boston- and Cambridge-based learning activity, the Kimbrough Memorial Fund must finance other aspects of the program, including those related to travel.

We invite you to consider the following level of support:
Kimbrough Scholars Friend: $250 (includes 4 tickets to One Drop of Love)

Kimbrough Scholars Friend: $150 (includes 3 tickets to One Drop of Love)

Kimbrough Scholars Friend: $75 (includes 2 tickets to One Drop of Love)

In addition to the Eventbrite option, donors may also choose to send their individual contribution directly to:

DreamWeek’s mission is to continue to advance and modernize the teachings set forth by Dr. Martin Luther King, Jr’s vision by creating dialogue across cultures and communities. dreamweek.org

Clips from One Drop of Love visit to Georgia State University for the Greatest Minds Society panel and discussion on racial identity. September 18, 2014. LIN… 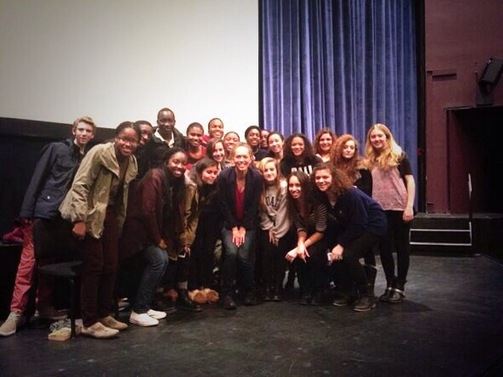 One Drop of Love
Today at Stanford! 7:30 PM
STANFORD UNIVERSITY, Stanford, CA
WHEN: Friday, September 5 – classroom visit at 11AM; performance at 7:30PM
WHERE: Campbell Recital Hall, 471 Lagunita (this address is to the Dinkelspiel Auditorium, which Campbell Recital Hall is attached to)
TICKETS: General admission; Stanford students and faculty will receive priority seating